I am pleased to announce the release of “Planet Earth” Manos Kourtis – Will Brahm Duo Debut Album. The album recorded in Thessaloniki and Los Angeles in 2020. It is a mix of sounds of electric, acoustic and classical guitars combined with classical instruments and flavor. Manos Kourtis and Will Brahm were on stage together for the first time in November 2019 in Thessaloniki and their musical approaches immediately matched. Their journey began with compositions by Manos Kourtis which are deeply inspired by Will Brahm’s personality both as a guitarist and as a composer. The 13 tracks of the album are compositions by Manos Kourtis for Duo Guitars (electric, acoustic, classical) mixed with classical instruments.

Manos Kourtis was born in Thessaloniki of Greece on the 4th of August 1980. From a very young age he showed his interest in music. This automatically drove him to private lessons, learning the classical guitar at the age of 9, with Michael Hatzianastasiou.
At the age of 15 he recorded his first album, “Forever”, with his band “Creation’s Ode”.
By the age of 16 he had become a well known guitar player in his home town, collaborating with several artists of pop, rock, metal and Greek traditional music.
At the age of 18 he met Vaggelis Tsotridis, with whom he had private lessons in jazz guitar. In the same period, he studied classical harmony at the conservatorium of Kostas Matsigkos. He completed his studies in 2005 and received his diplomas in Classical Harmony and Electric Guitar.
All over the years he’s worked with several famous singers and musicians of his country.
While building his career, he is also teaching jazz harmony and guitar at music schools and conservatoriums. At the same time, he is playing at concert halls, giving a lot of seminars and recording several albums all over Greece.
In 2006 he was encouraged by Vaggelis Tsotridis to take the exams at the University of Rotterdam in the Netherlands, which he passed with high grades and studied there for the next years. Meanwhile he was taking classes of jazz music with worldwide known musicians, such as Jim Hall, Pat Metheny, Mike stern, John Scofield, John Ambercrombie, Joshua Redman, Charlie Haden, etc.
He graduated in 2011 with the title of Jazz Harmony specialized in Jazz Guitar.
All these years, his need to express his love in music, has made him compose several albums and create studies of music, having as a main goal to find and express his personal innerself.
Today Manos Kourtis is a teacher and composer, with his own albums, based on his personal musical forms, always searching new paths in music harmonies and forms, in order to develop his own style. 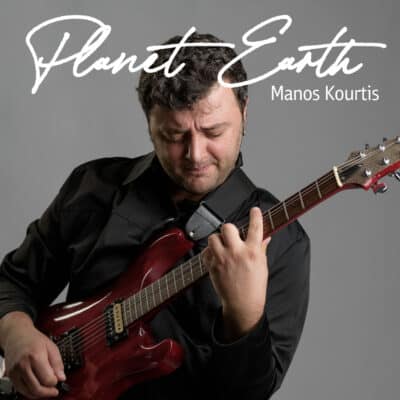